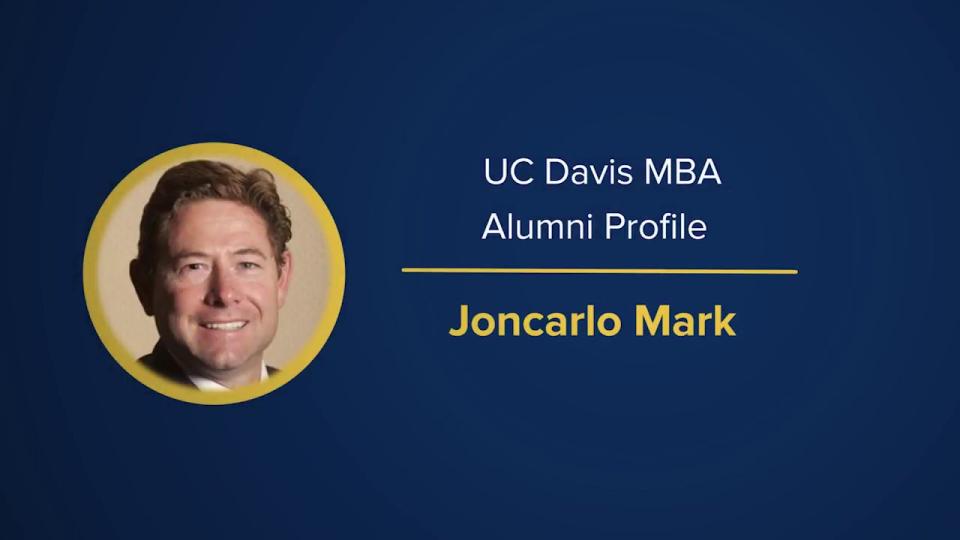 Joncarlo Mark is the founder and managing member of Upwelling Capital Group LLC. Prior to forming Upwelling in 2011, he was a senior portfolio manager at the California Public Employees Retirement System (CalPERS). Mark is the chairman of AltExchange Alliance; an advisory board member for the Private Capital Research Institute (PCRI), and serves as the Finance and Investment Committee chair on the UC Davis Board of Trustees.

In 2000 Mark was part of the group of students who founded the GSM Endowment. In 2015 he coordinated a fundraising effort with the Class of 2000 to raise $50,000 for the GSM Endowment; the class now has an interview room named for them at Gallagher Hall.

Mark is a ready and willing volunteer for the School, sharing his time and talents generously. Fueled by his commitment to his alma mater, Mark:

"Well, Davis was instrumental for me because I actually wasn't in Finance and investments prior to coming to Business School. I spent six years in the General Management, Sales in the General Management role, so basically through the GSM I was able to make a career change. And from the fact that I had a friend, who was an intern at CalPERS, hand my resume to a hiring manager at CalPERS and 12 years later and I was reporting directly to the Chief Investment Officer helping manage the 48 billion-dollar Private Equity program at CalPERS."

What is your favorite GSM memory?

Getting called up to the front of the class, it was our first year and we had an Accounting professor and I might have been talking or something like that and he came up, he's an Australian guy, and asked for me to tell a joke. So, I actually told the joke and it has actually an Australian joke about Australian tourists coming to the United States and saying something in an Australian accent that was misinterpreted by the police officer that pulled them over and the entire class was rolling. I think the professor was, I think he was pretty entertained as well but just I think it reflected the camaraderie that we had and we had people that were smart, people that were committed, people that enjoyed business school and today are making a difference, both in business and philanthropically.

Why is it important to give back to the GSM?

I grew up in a family that gives back, and for me, personally it's rewarding. To give back whether that's my time, energy, resources to the GSM, that was an important part of my life and my professional and personal development.

Particularly, higher education has been a tremendous pressure. The funding from the state is less than ten percent today, so without the private support and the endless hours of volunteer time that have been contributed by a lot of different people, you know, UC Davis would struggle and the GSM would struggle.

What should future business school graduates be aware of as they start their careers?

Cherish the moment. Take advantage of the relationships that you build in school, many of those relationships would be ones that you'll hold onto forever. Be a sponge. Obviously, you're going to be focused on your career but a lot of your professional development will come as a result of the friendships you build and you never know someone who you meet is the key to unlocking a great opportunity, professionally or even personally.