Jesse Rosales didn’t climb a mountain in a day.

Summiting the second highest peak in the world—a feat more consuming and dangerous than scaling Mt. Everest—took years of preparation, perseverance and every project management skill in his toolbox.

From a business perspective, the summit was his strategic objective, the climbing expedition his management project, and each leg of the climb was one in a long series of process-oriented goals. 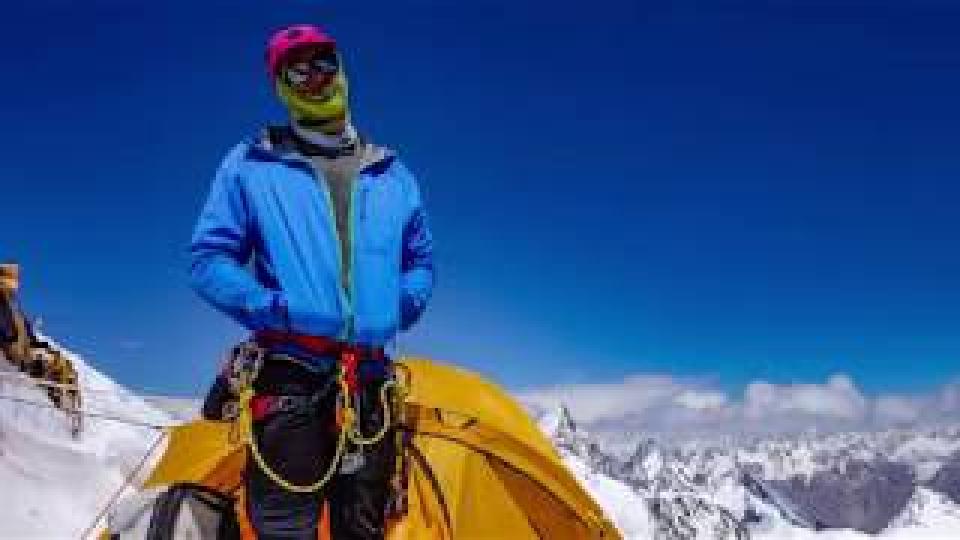 He boiled down a specialized and intensive training schedule into a rigid checklist of daily tasks.

“You can get really overwhelmed by your end goal,” he says. “The Graduate School of Management taught me to take more manageable chunks at anything you’re working toward.”

He balanced a full-time career while earning his MBA in the Bay Area part-time program and maintaining a 20-hour-a-week training schedule. He then took two months off to slowly ascend the “Savage Mountain,” a climb where one person dies for every four who make it to the top.

A Mountain of “Manageable Chunks”

On the slopes of K2 high above the China–Pakistan border, Rosales concentrated on putting one foot in front of the other, pushing forward through each section and each new set of obstacles.

On summit day while ascending past one of the most precarious sections of the climb, his focus suddenly slipped away, a fog replacing it. He realized he was deathly drunk on oxygen deprivation and “walking like a baby moose,” his air tank crucially empty. At nearly a crawl, he eventually reached a safe place to stop, swap canisters and fit in a brief recovery before switching to the next objective.

“The Graduate School of Management taught me to take more manageable chunks at anything you’re working toward.”

Throughout the climb he stayed the course, even one night as a sudden blast of snow dust pelted his face from an avalanche thundering somewhere above in the darkness.

Nearly one month after hitting the trail, Rosales’ team summited. Too exhausted to celebrate, they started the long descent just 45 minutes later. It remained “business as usual,” calmly rappelling the now-crowded and icy ropes, careful with each foot placement, navigating slowly downward, and past a vertical drop where hours later unfortunate fellow climber would take a fatal fall.

Balance and Fulfillment in Life

Jesse Rosales didn’t climb K2 “because it’s there,” as the early mountaineer George Mallory once expounded.

Before the expedition Rosales saw climbing as a way to test his limits. Now he’s discovered an unexpected connection between the technical mountaineering, his science background and a newfound gratification in pursuing meaningful business objectives.

“Sometimes the path we take to get somewhere isn’t always the correct path up front and instead might be a meandering one,” he says.

This was as true for his career as it was for his climbing. Rosales is the rare biopesticide specialist with an MBA. He began on that path one day while studying crop science at UC Davis as an undergraduate student.

“I want to do something good, that not just makes money for a company but makes a positive change.”

Inspired by this sustainable approach to combating problems in the environment, Rosales later joined Marrone Bio in a sales role, rising up to product management over several years, while he continued exploring ways to continue that upward career climb while gaining new skills and testing his limits.

“I could advance my career more quickly by pursuing an MBA, so that I could learn all the frameworks necessary in diagnosing business situations,” he said. “It’s the same kind of way that I would take an alpine skills seminar: I would get my MBA so I could then practice general management.”

An Immersion Into Food and AG

The weeks spent on K2 were a time for Rosales to reflect. While he enjoyed the day-to-day process of managing challenging projects in the areas of climbing, research and business, he also needed a meaningful end-goal for all his work.

Rosales isn’t alone in searching for a deeper purpose through a business career in sustainable agriculture. MBA students are increasingly focusing on food and agricultural innovation in their studies. It speaks to a much broader movement for creating sustainable food systems that deliver fewer environmental impacts, can mitigate and adapt to climate change, and help to feed a rapidly growing global population.

“Sometimes the path we take to get somewhere isn’t always the correct path up front and instead might be a meandering one.”

The Graduate School of Management has responded to the growth of agribusiness with a new Food and Ag Industry Immersion. The course connects business students with graduate students in food science fields to collaborate on live case studies presented by industry executives. Pam Marrone partnered with the program as a guest executive for one of those case studies. The course gives students the opportunity to tap into the School’s corporate network while building on UC Davis’ global leadership in food, nutrition and agricultural research.

Finding niches like this in a rapidly consolidating industry is key. Rosales now works in product management for biopesticides for the agribusiness arm of Wilbur-Ellis, based in Denver, Colo. Rosales’ division is able to differentiate itself from competitors through this specialized market niche. It also allows Rosales to continue the work in agricultural sustainability that he began at UC Davis as a young climber a decade ago.

“There’s no one right way to do it,” he says about climbing as well as finding meaning in his career. “It’s all about how good you are at problem solving, managing risk and taking in a lot of different considerations to determine the best outcome for you.”